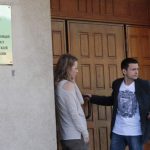 Two opposition parties, the People’s Freedom Party (formed by ex-Prime Minister Mikhail Kasyanov and ex-Deputy Prime Minister Boris Nemtsov) and the Republican Party of Russia, overseen by former lawmaker Vladimir Ryzhkov, have merged to create RPR-PARNAS.  Moscow police have detained at least 14 people of around one hundred undertaking what they have dubbed an ‘Occupy the Investigative Committee’ campaign, urging the release of 13 fellow activists who were arrested in the May 6 March of a Million.   Since he apologized for wayward behavior towards a Novaya Gazeta journalist, there have been calls for the resignation of the Committee’s chief, Alexander Bastrykin.  Human Rights Watch has condemned the detention of five Russian journalists who held a picket in support of said colleague.  It has been reported that opposition leader Ksenia Sobchak may be charged with tax evasion.  RFE/RL looks at a musical tribute to the white ribbon movement.  The Kremlin human rights council apparently has rock singer Yury Shevchuk, opposition organizer Olga Romanova, and journalist Vladimir Pozner tapped for potential membership.

Former Deputy PM and Rosneft CEO Igor Sechin has been appointed the secretary of a new commission tackling energy issues under President Vladimir Putin, in a ‘move that threatens to undermine Deputy Prime Minister Arkady Dvorkovich and other liberals in the cabinet’, says the Moscow Times.  President Putin has also appointed Just Russia party co-founder Alexander Babakov as presidential envoy for engaging with Russian organizations abroad, as well as dismissing the supervisor of the high-profile police reform, Sergei Bulavin.   Early mayoral elections in the Siberian city of Omsk have drawn a ‘remarkably low turnout’.  Following the rejection of his case in court, former Astrakhan mayoral candidate and ex-hunger striker Oleg Shein has vowed he will take his appeal to the ECHR.

Reports that a large Russian amphibious ship carrying arms was destined for Syria are false, says a naval source.  Foreign minister Serge Lavrov has rejected claims by Washington that Moscow has discussed Syria’s future without President Bashar Assad.  In a tit-for-tat move over Magnitsky sanctions, Russia has banned entry to 11 US administration officials for human rights abuses at facilities including Guantanamo Bay and the Abu Ghraib prison in Iraq.  Kazakhstan has authorized Russia to carry out launches from the Baikonur space center.

Russia’s soccer association will have to shell out $37,800 for its fans ‘improper conduct’ at the Euro soccer championships.  St Petersburg’s police chief has denied rumors that the city’s homeless will be turfed out en masse before the St. Petersburg International Economic Forum begins.