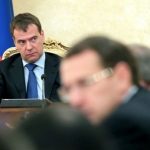 With the departure yesterday of Valentin Gefter and Boris Pustyntsev, the total number of people who have now left the Kremlin’s rights council is 15.   Slavic Union leader Dmitry Demushkin has expressed his hope that Russian nationalists will gain seats on the advisory body.  A new poll by the Levada Center shows that only 15% of Russian citizens fully share the views of President Vladimir Putin, a drop on similar polls taken over the past two years.  The Investigative Committee has denied accusations that it is putting pressure on those detained for their part in the May 6 March of Millions.  Vladimir Ryzkhov argues ‘judges […] accept the testimony of the riot police on blind faith and rubber-stamp one conviction after another‘.   This report shows how testing the new law on rallies produces some amusing results.  The Moscow mayor’s office has rejected Left Front’s application to hold a new rally.   The Moscow Times reports that authorities are introducing punitive measures for those offering hyperlinks to ‘extremist content’ on the Internet.

A group of around 70 Russian-speaking Americans have participated in New York’s annual gay parade to raise awareness about discrimination in Russia.  ‘I think the law criminalizing homosexuality will eventually return’ says one beleaguered gay woman in St Petersburg in an article by RFE/RL.  In a rare cooperative move, the Communists and A Just Russia have agreed to offer a single candidate at the mayoral elections in the western exclave of Kaliningrad in October.

Presidents of Israel and Russia Shimon Peres and Vladimir Putin have unveiled a memorial in the town of Netanya to pay tribute to the Red Army victory over Nazi Germany.  During his visit, Putin reiterated his belief that regional conflicts should be settled internally.  Israel urged the Russian President to take a harsher line on Iran’s nuclear program.  Putin has congratulated Mohammed Mursi upon his election as Egypt’s president, though the fact that Morsi is a member of the Muslim Brotherhood, which Russia’s Supreme Court holds as a ‘terrorist organization’, could make for a complex relationship.  A Foreign Ministry spokesman has accused the US of being the country with the worst record on human trafficking.

Famed broadcaster Vladimir Pozner is leaving liberal TV station Dozhd after receiving an ultimatum from the state-run Channel One.  Fears abound for the safety of St Petersburg’s architectural heritage.   The reason for drug abuse in modern Russia: poverty? Social decay? The unchecked flow of opium from Afghanistan?  No, says top substance abuse official Yevgeny Bryun, it’s the influence of The Beatles.