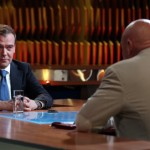 At President Putin’s relatively smooth meeting with EU leaders in St Petersburg, European Council President Herman van Rompuy stated that the two sides ‘fully agree’ that Kofi Annan’s peace plan for Syria is the ‘the best opportunity’ to prevent civil war in the country.  Putin called for a ‘long-term plan for cooperation’ with the bloc, but warned that a ‘pragmatic, businesslike approach without any ideological or other stereotypes‘ was necessary.  He also dismissed criticisms regarding Russia’s human rights record, arguing that Russia has no political prisoners and defending the jailing of Mikhail Khodorkovsky.  Regarding the Kremlin’s stance on Syria, he can certainly count on Venezuelan President Hugo Chavez for support.

Prime Minister Dmitry Medvedev has, the FT says, made a dubious attempt to assert his authority in his first television interview in his new job.  He has argued that former ministers now in the presidential administration will have no influence on the work of the cabinet.  According to RFE/RL, the former President also spoke of Vladimir Putin’s ‘moral’ right to return to the presidency.  Billionaire and ex-presidential candidate Mikhail Prokhorov has announced the formation of new party, the Civic Platform, whilst adding that its creators, who will not join it, are ‘all non-party people’.   The Communist Party has denied reports that its leader Gennady Zyuganov has had a heart attack.

Opposition blogger Aleksei Navalny has been ordered to pay $900 in damages to United Russia State Duma Deputy Vladimir Svirid for the ‘moral harm’ caused by calling him a ‘crook or a thief’.  An 18-year-old woman arrested for her role in the march of a Million protest is facing new charges that could mean up to eight years in prison.