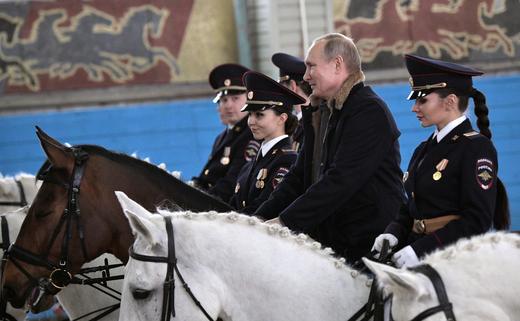 In honour of International Women’s Day, the Moscow Times compiled a review of men’s responses to Levada Center polls about women. Only 2 out of 100 young Russian men value career-minded women, with home-making being at the top of their list of good feminine qualities. The quality of independence came last. President Vladimir Putin marked the occasion with an innovative photo op, mounting a horse and riding alongside female police officers. In Crimea, activists took the opportunity to stage a pro-Russia display by dressing up as the “polite people” and handing out flowers to women. This week’s new bills to stop “fake news” and online “disrespect” of the Kremlin are just a part of Russia’s wider plans to restrict free speech on the Internet, notes RFE/RL. Social network Vkontakte usually helps police with domestic compliance of regulating online activity, but Russia has been able to prosecute users who shared materials on foreign-operated social networks as well.

Billionaire Roman Abramovich has been forced to sell his shares in the state-run Channel One television network due to the Russian law prohibiting foreign citizens from owning more than 20% of a media company. (Abramovich acquired Israeli citizenship last year.) The stake was bought by VTB Capital. Novatek worked with Sberbank on a special scheme that allowed French energy major Total to acquire a stake in its LNG 2 Arctic project without Kremlin approval. Rusal has restored its product deliveries to the US.

The Guardian spoke to the two young activists detained for shouting anti-Stalin slogans at a memorial service marking the anniversary of his death.

PHOTO: Russian President Vladimir Putin rides a horse as he attends a meeting with female officers of a mounted police unit. (SPUTNIK)