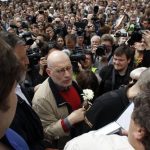 Russian novelists and poets have led a ‘Test March’ in Moscow in defense of the right to gather in the street.  The rally was attended by opposition-minded luminaries such as detective novelist Boris Akunin, poet Dmitry Bykov, novelist Lyudmila Ulitskaya, and writer and broadcaster Yulia Latynina.  Police estimated the turn out at 2,000, the event’s organizers say 10,000 joined.  ‘Unlike the May 6 rally, police presence was minimal, and there were no reports of violence or detentions’, says the Moscow Times.  The march led towards the opposition base camp at Chistiye Prudy, which protestors have vowed to keep going until a new March of Millions scheduled for June 12.  RFE/RL reports on how 19th-century Kazakh poet Abai Qunanbayulihas has become an unlikely rallying cry for the protest movement.  The authorities’ attempts to confiscate protestors’ toilet facilities have ended in failure.  Socialite-turned-opposition figurehead Kseniya Sobchak has accused a woman of falsely claiming to be a disgruntled resident of the Chistiye Prudy neighborhood to tarnish the reputation of protestors.  United Russia deputies have submitted legislation to parliament that would dramatically increase the fine for protesters who hold unsanctioned demonstrations, to up to 900 times more than its current sum. A judge in Moscow City Court has supported extending the detention of three members of the female punk group Pussy Riot.  The Guardian’s Nick Cohen touches upon the Pussy Riot case when discussing the sinister uses of new media by authoritarian regimes.  US Senator John McCain has criticized President Vladimir Putin for the recent crackdown on protesters and a number of other rights infringements.  Election authorities in the Siberian city of Omsk have banned the main opposition candidate from the mayoral race on a technicality, Ria-Novosti reports.

NATO Secretary-General Anders Fogh Rasmussen has called Russia’s statements on missile defense ‘a matter of concern […] they are not in line with what we decided when we last met in Lisbon’.   The Kremlin will send a high-ranking official to the NATO conference in Chicago, says this report.  President Putin and Iranian President Mahmud Ahmadinejad have, following a telephone exchange, expressed a mutual willingness to ‘continue the onward development of Russia-Iranian relations’.  Vladimir Putin has pledged that Russia will continue to offer support to the breakaway republics of Abkhazia and South Ossetia.