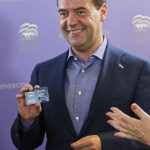 It has been reported that Prime Minister Medvedev has signed a decree to appoint Igor Sechin, who was left out of yesterday’s cabinet, as chairman of the Rosneft Board of Directors, a position he formerly occupied.  The decision has confirmed that arch Putin ally Sechin will play a powerful role in the new administration, says Reuters.  Bloomberg offers an analysis of his return, if indeed, he ever really went away.  President Putin has appointed seven former cabinet ministers to posts in the Russian presidential administration, indicating, as Brian Whitmore points out here, ‘[t]he ruling elite remains intact and real power — as it has always been with the exception of Medvedev’s presidency — will be concentrated in the Kremlin.’  Why are women underrepresented among Russia’s political elite?

The State Duma has reportedly approved in a first reading the new bill which would introduce harsher fines for protestors flouting the law on rallies, making them up to 200 times bigger.  Moscow City authorities apparently want to charge protestors $660,000 for damage to grass at Chistiye Prudy and have refused an offer of fresh grass from socialite and opposition figure Kseniya Sobchak.  A new opposition camp has reportedly been set up by the Bulat Okudzhava Monument.  The authorities in Ryazan have apparently attempted to use the draft as a way of halting the work of the local leader of the Other Russia party.

The Tver Oblast court in western Russia convicted ten Islamic militants for their involvement in a train bombing in the region in November 2009.  Poland has warned Moscow against interfering in NATO’s plans for a missile shield in Europe since Russia is not a member of the military alliance.  Some observers have suggested that the work of opposition blogger Ilya Varlamov is in fact a Kremlin project: this latest story will give them further ammunition.

Here a statistic to cheer those worried by Russia’s demographic deficit – apparently in the first quarter of 2012, the country’s population grew by around 31,000.