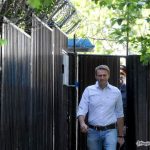 Kremlin human rights council head Mikhail Fedotov has been scolded by President Putin for publicly criticizing the new bill raising fines for protests, which he hoped the President might veto.  Putin wholeheartedly supports the bill as ‘strengthening democracy’.  Forbes’ Mark Adomanis does not see how such a draconian initiative will do anything but stimulate the protest movement.  A new report issued by the Moscow-based Center for Strategic Research has concluded that Russia is facing a ‘full-scale political crisis which may lead to a radical transformation of the country’s ruling system’.  Protest leaders Sergei Udaltsov and Alexei Navalny were greeted with applause upon their release from jail today; the former, however, may face almost immediate re-arrest.  The latter’s bank accounts are to be examined for evidence of money laundering on the orders of a United Russia deputy.  Nashi co- founder Vasiliy Yakimenko has retracted the suggestion that he funds blogger Ilya Varlamov’s opposition media outlet Ridus.

Russia has apparently successfully test-fired a new intercontinental ballistic missile in what a senior general has described as a ‘response’ to the NATO’s European missile-defense shield bitterly opposed by Moscow.   A Russian military jet has crashed in the Czech Republic, injuring six people when it rolled off the runway.

A new poll has found that 59% of Russians apparently believe that the ideal president should be a wise politician and ‘father of the nation’ figure.  The Moscow Times reports on the new darling of the cabinet, Health Minister and fifth generation physician Veronika Skvortsova.

PHOTO: Navalny walking out of the detention center where he was held for 15 days.  (Anton Tushin / Ridus)