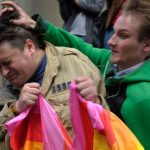 As a Russian cargo ship loaded with arms reportedly reached Syria on the weekend, the Guardian reported that President Obama sees Putin’s support as key to securing the transition of power in the state and will raise the topic at the pair’s meeting next month.  The New York Times examines the problematics of this: ‘[e]ven if Mr. Putin does agree to the Yemen model, it is unclear if he and Mr. Obama have the same definition of what that model is — or how to put it into effect’. ‘I don’t think the Russians are going to do anything’ is the verdict of one Syria specialist at the Washington Institute for Near East Policy.  Britain’s Foreign Secretary, William Hague, is expected to raise the matter on his one-day visit to Moscow.  If they had hoped that the weekend’s Houla massacre would be a turning point for the Russians on the Assad administration, this reaction might indicate otherwise.  Deputy Foreign Minister Gennady Gatilov said the slaughter ‘deserves condemnation’ but that it was too early to say who was to blame.  On his first trip to Moscow, Serbia’s president-elect Tomislav Nikolic was told by Putin, who views ‘Serbs as our spiritual brothers’, that Belgrade would soon receive $800 million in loans.

Russian Orthodox activists descended upon two gay rights protests in Moscow, a video of which can be seen here.  Dozens of people were detained, among them prominent gay rights activist Nikolai Alexeyev.  ITAR-TASS reports that 35 opposition activists were detained in Moscow’s Arbat area during a white ribbon protest, though the Moscow Times puts this figure at around 100.  Reuters reports some rough treatment of protestors at the hands of the police.  Five opposition activists were detained in St Petersburg’s Arts Square during a protest stroll.  Opposition activists have submitted an application for authorities to approve the attendance of up to 50,000 people at their next rally on June 12.  Ria-Novosti reports that six OMON officers who were injured in fights during an anti-Putin rally in Moscow earlier this month have received new apartments as a reward.

Prime Minister Medvedev is officially the new head of Russia’s ruling United Russia party.  The four Russian bikers who were arrested in Iraq on Friday have reportedly been released.  Last month search engine Yandex for the first time outstripped the country’s most popular state-run television channel, in terms of users, suggesting that Russians are turning increasingly to the Internet for their news.  Russia’s all-singing, all-baking Buranovskiye Babushki have come a respectable second in the Eurovision song contest.