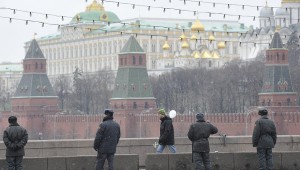 According to the New York Times, a spokesman for the art collective Voina, which has gained a reputation for radical politically charged works, has told the press that its members broke into a St. Petersburg police station on New Year’s Eve and used gasoline bombs to burn a police vehicle used to transport prisoners.  A video of the action, described as ‘a gift to all political prisoners of Russia’, can be seen here, courtesy of the Huffington Post.  Intellectual and Voina champion Andrei Yerofeyev has said in praise of the work: ‘The goal of art is deeper than activism […] They have carried out their assignment‘.  Ria-Novosti says that 35,000 police officers will be assigned to maintaining public order on Moscow’s streets during the New Year and Christmas celebrations, during which over 600 mass events are planned.  Russia Today reports on how the recent wave of political dissent in Russia has prompted the Communist party in the Altai Republic to devise a politicized pantomime.  According to a Levada center poll on the subject of political unrest, 45% of respondents are doubtful that opposition protests will lead to a coup d’etat, against 17% who said they might.

Russian Investigation Committee spokesman Vladimir Markin has confirmed that former Moscow Region first deputy prosecutor Alexander Ignatenko, who is on an international wanted list on suspicion of covering up an illegal underground casino ring, has been detained in Poland.

Has the reset been well and truly ‘cancelled’ as Aleksei Pushkov, chairman of the foreign affairs committee in the Duma put it last week?  The FT’s Charles Clover examines troubled US-Russia relations.  This will do little to foster trust: a Russian defense official has apparently denied that Iran has any long-range missiles, in response to reports of series of missile tests conducted by Tehran near the Strait of Hormuz.

PHOTO: Over 600 mass events will be held in Moscow during the first days of 2012.  (Alexey Kudenko/Ria-Novosti)