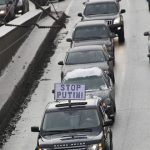 A car rally ‘For Fair Elections’ which took place on Moscow’s Garden Ring yesterday apparently attracted hundreds of vehicles.  Around 40 vehicles participated in the same style of anti-Putin rally in Samara.  Despite a ban from the city authorities, opposition activists in the city of Barnaul set up a nanoprotest on Sunday involving dozens of toys and figurines.  Tens of thousands of people reportedly demonstrated in cities across Russia in support of Prime Minister Vladimir Putin (events apparently took place Vladivostok, Khabarovsk, Irkutsk, Novosibirsk and Volgograd).  In Moscow, a pro-Putin car rally late Saturday involved 2,000 vehicles, according to police.  About 10 people staging a street protest against Putin at the same time were detained.  Reuters considers how the ranks of the pro-Putin marchers are formed.  State Duma deputy Ilya Ponomarev of the Left Front apparently intends to sue Moscow police following an attack by pro-Kremlin youth activists and then the police.  The ‘For Fair Elections’ campaign organizers have clashed with Nashi over plans to hold a rally on the same day, March 5.  Sergei Udaltsov, the leader of the opposition Left Front movement has proof, he claims, that the permit Nashi received to hold their rally was illegally gained.

Presidential aide Igor Yurgens apparently believes that his current employer would not be a suitable successor to Putin in the PM’s seat, citing instead former Finance Minister Alexei Kudrin as the ‘ideal candidate’.   ‘The system he epitomizes personally … has been outgrown by Russian society’ – on Putin’s ‘crossroads’ from the FT.  In an interview with RFE/RL, Mikhail Gorbachev explains why he believes Putin will refrain from using force on anti-government protestors.  A deputy minister has claimed that hackers have attempted a series of cyber-attacks on newly installed polling station webcams.  RFE/RL examines the fragmentation of the left wing.

Prime Minister Putin has revealed plans for a $772 billion overhaul of the armed forces in an article in Rossiiskaya Gazeta.  In the text, entitled ‘Being Strong Is a Guarantee of Russia’s National Security’ he argues that the development of the ‘chronically underfunded’ army is justified by the threat of conflict on Russia’s borders.  The army will receive over 400 modern intercontinental ballistic missiles (ICBMs), more than 100 military spacecraft and over 2,300 new tanks within the next ten years, says the man widely expected to return to the Presidency.  Russia is apparently refusing to accept a US plan to reduce the flow of Afghanistani drug traffic through Central Asia, due to concerns about Washington’s interference in its sphere of influence.   Talks on regulating the global arms trade, in which Russia is a major player, have apparently hit a rocky patch.

In what may have been the Baltic state’s most popular referendum ever, 78% of Latvians have voted against making Russian an official language.  Russia has hit back with claims that a refusal to allow a Russian observer mission to the referendum was a breach of international regulations.

A new film, Putin’s Kiss, looks at the blind adoration the Nashi movement inspired in one of its leaders.