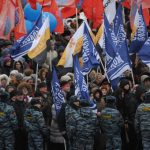 The Moscow Times has a live blog following the pro-and anti-Putin marches in Moscow today: among them a rally at Luzhniki stadium, a Liberal Democratic Party event at Pushkin Square; a rally sponsored by the Communist Party and opposition group Left Front at Teatralnaya Ploshchad and an ‘anti-orange’ event at the All-Russia Exhibition Center.  Around 120,000 people in total are expected to be seen on the streets of Moscow.  The rally at Luzhniki Sports Complex, organized by Putin’s All Russian Popular Front, has attracted 30,000 people so far, say police estimates reported by Ria-Novosti, which also has a live video blog.  The organizers of the anti-Putin Big White Circle protest planned for the weekend claim that their website has been subject to a cyber-attack.

RFE/RL’s Tangled Web has a series of extraordinary videos exemplifying how Putin’s team use sex to sell the virtues of the Prime Minister.  Some women just aren’t buying it, says the Washington Post.  Today’s Post also offers a summary box on the pressure exerted on beleaguered liberal newspaper Novaya Gazeta.  A leading Orthodox Church official has told the media that Russia should make blasphemy a criminal offense, the day after rambunctious rock band Pussy Riot performed a protest song at the altar of Moscow’s largest cathedral.

The Huffington Post has translation of Putin’s Rossiskaya Gazeta article in which he expresses the need to protect national security.  The president of Russia’s southern republic of Tatarstan has thrown his support behind ‘Tsarist’ Putin.  Ria-Novosti reports that the Russian Defense Ministry will modernize two airfields in its Baltic enclave of Kaliningrad and is planning to launch at least 100 military satellites in the next ten years.  An official with Estonia’s security police has been arrested on suspicion of spying for Russia.

Following a telephone conversation focusing on the situation in Syria, President Medvedev and Iranian President Mahmoud Ahmadinejad have said they believe that the crisis must be solved without foreign intervention, though Russia is working to secure safe passage of humanitarian convoys.  Despite international consternation at Russia’s stance on Syria, President Medvedev has awarded a controversial Syrian writer a major cultural prize.  A Russian deputy foreign minister has warned that an attack on Iran could have ‘catastrophic’ consequences.