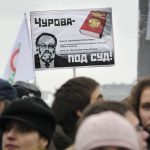 The Central Elections Commission has officially announced that it will refuse to register Yabloko’s Grigory Yavlinsky as a presidential candidate, confirming a report leaked earlier this week. His candidacy was refused on the basis that more than 25% of the 2 million signatures necessary for his bid were deemed ‘inadmissible’.  Central Elections Commission chairman Vladimir Churov, who has rapidly become the face of electoral fraud for the opposition movement, defends his neutrality in the Moscow Times.  Liberal Democrat deputy Leonid Slutsky has apparently told a PACE debate that charges of vote-rigging leveled against Russia are unfair.  The OSCE has said that whilst being an ‘interesting’ idea, Vladimir Putin’s proposed webcams in polling stations are not a substitute for observers.  The Guardian examines how the opposition in the Siberian city of Barnaul have resorted to doll protests (images of which can seen here) as a means of circumventing police censure.  The Moscow Times reports that opposition leaders have chosen to skip a meeting with United Russia designed to stimulate dialogue over the groundswell of protest.  1,283 activists in Moscow are apparently gearing up for a vehicular protest on Sunday on the Garden Ring Road.  The opposition rally planned for February 4 could be crashed by the All Russia People’s Front, says this report.   Why the opposition should be wary of consorting with US Ambassador McFaul.

Prime Minister Putin’s campaign manager Stanislav Govorukhin has decried Medvedev’s lack of vigor regarding his tandem partner’s presidential campaign.  First Deputy Prime Minister Igor Shuvalov has seconded the President’s clement stance on Mikhail Khodorkovsky, saying that he too believes the Yukos founder should be pardoned.  Putin has reiterated his concerns about illegal migrant workers creating ‘ethnic enclaves’, and suggested that companies and individuals who employ said workers should face criminal charges.  Michael Bohm analyzes Putin’s refusal to participate in election debates, which, he says, ‘shows that he is not willing — or able — to defend his record.‘  According to its statistical report on 2011, cases from Russia constitute around 27% of the overall number of lawsuits pending a verdict from the European Court of Human Rights – the most of any country.

NATO Secretary General Anders Fogh Rasmussen says that ongoing failure to make progress on missile defense negotiations is imperiling a planned NATO-Russia summit in May.  Moscow has vowed it will block any UN calls for Syria’s President Bashar al-Assad to resign, and will continue to promote its own draft resolution on Syria in the Security Council.

A 78-year-old former senior Russian archive official has challenged the FSB’s official narrative on the fate of a Holocaust hero.  On Russia’s ‘alarming’ score in the 2012 Environmental Performance Index.  Hypothermia hits Moscow’s most vulnerable residents.

PHOTO: Elections chairman Vladimir Churov has become a lightning rod for protesters, but he says he is just a simple bureaucrat and not a political operative. (Igor Tabakov / MT)