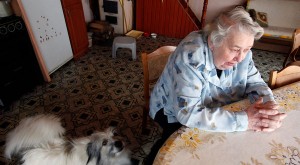 On March 21, long-term Putin adversary Marina Salye passed away at the age of 77.  The origins of the one-time St Petersburg councillor’s battle with Putin can be traced back to 1990s when Salye attempted to expose the then deputy mayor’s allegedly corrupt management of food bartering in the Leningrad administration.  During the 90s, she proved a formidable critic, and as of 2000 endured a decade-long spell in the political and actual wilderness as a result of her stance on the man she predicted would become the president of a ‘corrupt oligarchy’.  Putin biographer Masha Gessen has written a moving tribute to the life of this dissident heroine in the New York Times. In the extract below Gessen explains how the recent anti-Putin protests returned Salye to public view:

I started looking for Salye about four years ago. Rumor had it she had long left the country, but it didn’t take me long to find out she was in Russia. At first she didn’t want to talk. Over the following two years I continued bothering people I thought might be in contact with her. Finally I was given a direct phone number and Salye invited me to visit her.

One day in 2010, a colleague and I were in Salye’s pink wooden house. Salye’s companion, whom she called her sister, fetched box after box of documents. Salye kept talking about rampant corruption in the St. Petersburg administration in the early 1990s, when Putin was the mayor’s right hand. I had seen some of the documents before; others were new to me. In any case, Salye was the only person who could guide me through them now: Gladkov, the co-chair of her investigation, had died in 2007 of a rapidly progressing degenerative neurological disorder. Salye and others claimed it resembled a chemical poisoning.

Salye started writing a blog. Even while living in the woods, she maintained a remarkably keen sense of Russian politics. Throughout 2011, she spoke out ever more forcefully in anticipation of last December’s parliamentary election. After the protest movement that shook Russia in the winter, she came out of hiding. On Feb. 4, she appeared in front of tens of thousands of protesters in St. Petersburg, just as she had done more than 20 years earlier.