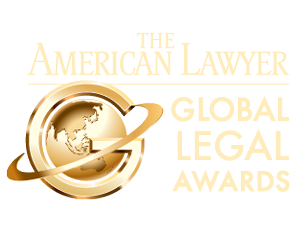 10 July 2013, LONDON – Robert Amsterdam of Amsterdam & Partners LLP says he is honored that his legal team has been recognized by U.S. magazine The American Lawyer for its work in what is being hailed as the “2013 Global Pro Bono Dispute of the Year.”

The inaugural Global Legal Awards, which celebrates “the full gamut of global legal work” of more than 300 law firms from across the United States, United Kingdom, and beyond, has selected Amsterdam & Peroff LLP (now Amsterdam & Partners LLP) for its historic victory in the case of Dr. Georges Tadonki vs. the United Nations Secretary General. The firm’s legal team – Robert Amsterdam, Andrew Durkovic and Katy Epstein – successfully prosecuted Dr. Tadonki’s case against the United Nations, which was argued before the U.N. Dispute Tribunal in Nairobi, Kenya.

“We’re genuinely grateful to The American Lawyer for recognizing this important case, and we hope that this nomination inspires other small law firms to undertake pro bono work in difficult areas of the world,” said Robert Amsterdam, founding partner of Amsterdam & Partners LLP.

According to an April 2013 article published in The Atlantic magazine, the result achieved by Robert Amsterdam and his team on behalf of Dr. Tadonki, who was wrongfully dismissed by his superiors for exposing a cover-up of a cholera epidemic in Zimbabwe, was remarkable in that the tribunal’s ruling was “a damning survey of misplaced priorities and institutional rot” that has occurred within a certain section of the U.N. bureaucracy.

“Our relationship with Amsterdam & Partners LLP has served our clients well across Africa. Hopefully this award will draw more attention to the unique capacity and international reach of the firm,” said Brian Kahn, head of Brian Kahn Attorneys of Johannesburg, South Africa, a strategic partner of the firm. “It’s been a pleasure to work alongside Robert, and we look forward to expanding together in the future.”

Over a career of 33 years of international law practice, Mr. Amsterdam has been involved in high-profile cases ranging from Africa to Asia to Latin America. From 2003 to 2010, Amsterdam served on the legal defence team for the Amnesty International-recognized Prisoner of Conscience Mikhail Khodorkovsky in Russia. In 2009, he represented Venezuelan businessman Eligio Cedeño, who was released despite highly politicized charges pushed by then-President Hugo Chávez. Retained by the former Prime Minister of Thailand Thaksin Shinawatra, Amsterdam continues seeking justice on behalf of more than 90 Red Shirt pro-democracy protesters who lost their lives in the Bangkok massacres of April and May 2010. Amsterdam & Partners LLP also represents the former President of Zambia Rupiah Banda and Internet entrepreneur Kim Dotcom, among other clients.

The inaugural Global Legal Awards, which aims to “honor global citizenship in all its forms,” announced honorees in 30 different categories of international legal achievement, including other renowned international law firms such as Clifford Chance, Shearman & Sterling, and DLA Piper, among many others. On September 23 a gala dinner will be held to announce four grand prizewinners in New York City.

More information on Robert Amsterdam and his law firm can be found on https://robertamsterdam.com and http://amsterdamandpartners.com.