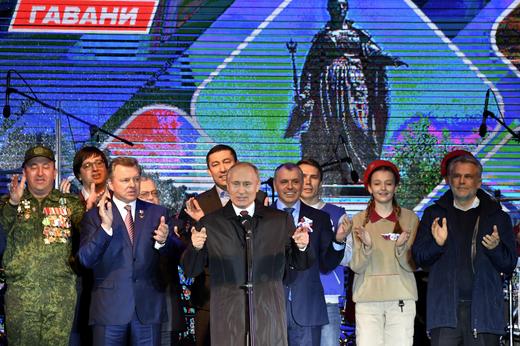 President Vladimir Putin visited Crimea yesterday to mark the 5th anniversary of an annexation that Russia, despite ongoing foreign criticism, says is a permanently closed matter. Putin launched two new power plants in Sevastopol and Simferopol, whilst Moscow celebrated with a street festival near the Kremlin. The new plants will cover what Crimea used to get from Ukraine, up to 90% of the peninsula’s needs. Putin praised his own decision to go ahead with the annexation, for which he says he had to “brush aside the likely negative side effects” that would affect him personally. A poll from the Public Opinion Foundation found that only 39% of Russians believe the annexation brought more good than harm – in 2014 the number was 67%. Meduza spoke to local businesses in the region, uncovering a bleak climate.

President Putin signed into law unpopular new measures that make it a criminal offense to disrespect officials with online posts, or to spread fake news online. Critics call the legislation a vaguely-worded blow to free speech, that will allow individuals to be jailed and for websites to be blocked. Prominent Chechen human rights activist Oyub Titiyev has been sentenced to four years in a penal colony on drugs possession charges. Titiyev says the drugs were planted in order to punish his political work. The International Investment Bank – whose chairman has longstanding ties to Russian intelligence agencies – is opening a new headquarters in Budapest.