Russia Will Not Save Greece 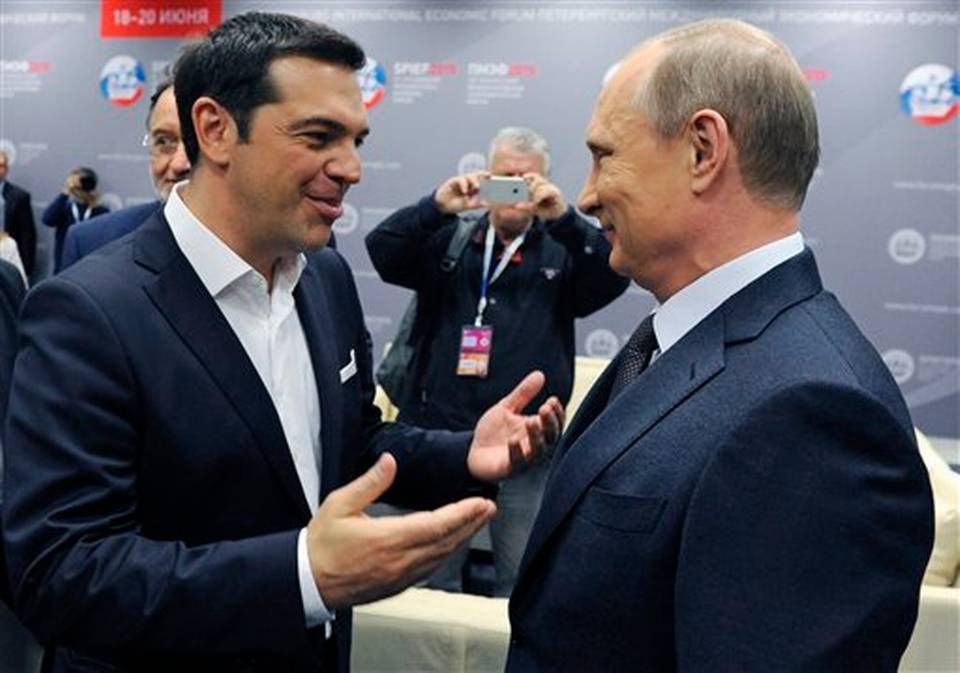 Here we are again. As I write this, Eurozone Finance Ministers are meeting with their Greek counterparts to attempt to hash out an agreement for an extension on their next loan repayment in order to keep the banks open and narrowly avoid default. Play time is over: both François Hollande and Angela Merkel telephoned Greek PM Alexis Tsipras on Sunday to say that the summit is not bargaining moment, but instead that this is deal or no deal for the creditors. The Greeks, on their behalf, want Europe to know that default and exit from the euro is a real possibility now that they won’t hesitate to make.

Loitering in the background is the uninvited guest Russia, which is enjoying every opportunity to ratchet up the pressure on the EU shortly following a highly contentious seizure of sovereign assets in Belgium related to the enforcement of the Yukos judgment, as well as the deepening economic sanctions related to Russia’s occupation of Eastern Ukraine. The Greek leadership also believes that closer relations with Moscow are a useful hedge in their negotiations with Germany, which is part of the reason why one of Tsipras’ first public comments after his election was to assail the EU’s economic sanctions against Russia as unfair.

The suggestions of a deeper Greece-Russia partnership serves as a rhetorical device for both parties. Just to drive the point home, on Friday Tsipras flew to Moscow on Friday, where he said he was looking for a “safe port,” while suggesting that by working together, Greece and Russia could somehow pull a sleight of hand to escape both the debt crisis while at the same time helping Russia claw out of its sanctions.

Russian President Vladimir Putin was making good sport out of the Greek negotiations, taking shots at Brussels after Tsipras signed a $2.3 billion extension of the planned (who knows if it will be built) South Stream pipeline.

“If EU wants Greece to pay its debts it should be interested in growing the Greek economy … helping it pay its debts,” Putin said upon closing the deal. “The EU should be applauding us. What’s wrong with creating jobs in Greece?”

The idea of Russia gaining significant influence over an EU member and NATO partner, even a failing one like Greece, is unsettling even to Washington. Historically Greece has been regarded as a frontline state during the cold war by the United States, and the gradual weakening of the EU political alliance – not just Greece but also the United Kingdom, poses a serious strategic concern. Even if the partnership between the two states remains rhetorical, a deeper relationship with the government helps them disaggregate and weaken EU foreign policy.

As Walter Russell Mead writes in The American Interest, “unless the EU gets its groove back, a divided, inward-looking EU is not going to be very effective dealing with the growing threats to its east and south, and the already difficult challenges facing American foreign policy will become significantly harder to manage.”

But the skeptics should rest easy for now, because the idea of Russia riding in to rescue Greece, solve their debt crisis, and wrestle them away from the EU to flourish as the next Novorossiya is, for the time being, pure fantasy.

Firstly, lest we encourage moral hazard, it seems like there is no such thing as a “red line” or a “final decision” for Greece. In fact, as I hit publish on this article, it already seems possible that an agreement to extent the debt repayment conditions has already been struck with the Eurogroup. Stock markets are already moving on the expectation of good news.

Secondly, Russia does not have the money nor the markets to save Greece. As Thomas Wright of Brookings tells the FT, “Russia is not a huge potential export market, it is not a new economic option that did not exist for the Greeks before the crisis.”

Thirdly, and perhaps most importantly, the Kremlin can do absolutely nothing in terms of influencing the financial negotiations with creditors and Eurozone partners. People argue all the time about the exact extent of the Greek debt, but one number that continually comes back is €320bn, which translates into 175% of its GDP. The current negotiations are about an upcoming payment due to the IMF of €1.6 billion, and Russia has clearly backed down from any suggestion of a loan, and Moscow is already trying to play down the extent of damages that falling oil prices, sanctions, capital flight (which hit $125 billion in 2014), and plunging FDI have had on its economy.

You can’t expect a country whose currency has lost 37% of its value over the past year to come in magically solve the world’s most difficult financial crisis overnight.

It is easy to understand the utility that Putin serves to Tsipras and vice versa in both their separate negotiations and brinksmanship with Europe. But the people of Greece should be wary of dreaming of a future alliance with Moscow – they have a lot more to lose and less to gain. Russia sees opportunities to advance its interests, and take what it wants from a country that has been placed in a desperate situation, and historically speaking, such deals don’t end very well for those on the other end.