Russia’s New Normal, or How Putin is Winning the War against Irony 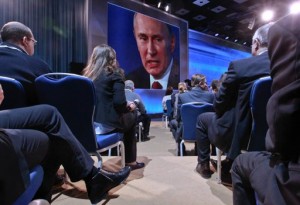 Call me a traditionalist, but when I have some ideas to share, I usually turn to this blog instead of firing away on Twitter.  But today, during Vladimir Putin’s latest marathon press conference, reading Twitter updates from Moscow’s foreign correspondents was both exhilarating and bizarre.

@miriamelder  Kalmykia journalist asks Putin to wish his daughter a happy birthday. Putin is signing a card for her. This press conf rocks.

Other foreign correspondents such as Shaun Walker (the Independent) delivered his commentary from the presser with a bit more sarcasm (which is understandable after 4.5 hours).

@shaunwalker7  In his first answer, long rant from Putin on Guantanamo and Abu Ghraib. Basic sentiment: how dare US lecture us on Magnitsky.

@shaunwalker7  Putin’s answer: In the US you’ll get a bullet in the head if you even take your hands out of your pockets.

@shaunwalker7  Putin pulls an Arsene Wenger on Magnitsky… I don’t know all the details, I didn’t see it happen…

I could go on and on quoting all the amusing observations culled from a room full of foreign journalists who had to waive their arms frantically in an effort to get a question into Putin then to just be ignored, but it’s besides the point.  What today’s press conference demonstrates is that Putin remains as rhetorically slippery as ever, calm and commanding over the media narrative, and increasingly concerned over how his legacy will be defined. In other words, what we’re seeing this year is something of an informal coronation of Putin as a modern-day Tsar – he’s king of the castle, master of his domain, undisputed leader who won’t be retiring any time soon.

So why is that this press conference in particular stands out as Putin’s coronation to me?  Because we find ourselves conforming the distortion that Russia has become under Putin, carving out a mentality of acceptance for a new definition of normal.  When truth becomes a service to power, when a government starts believing its own propaganda, Putin is winning the war against irony.

Although there were a few notable exceptions with local and regional journalists challenging Putin with tough questions, the whole affair has cemented a tradition of what passes for media access to the leadership – a parade of obsequious praise.

Speaking on the recent decision by the Moscow City Court to reduce Mikhail Khodorkovsky’s sentence by two years (interesting timing), Putin claimed he had nothing to do with the court’s decision. To think he had any influence over Russian courts was “to completely misunderstand our legal system.” Irony, please!

Speaking on why United Russia recently passed a law that would allow the regions to avoid direct elections of governors, Putin said, “Listen to me. I am for direct election of governors.” Are you tugging at your hair in frustration yet?

And then, on the topic of democracy, he just mails it in: “I cannot call this system authoritarian, I cannot agree with this. If I considered a totalitarian or authoritarian system preferable, I would simply have changed the Constitution, it was easy enough to do, it doesn’t even require any sort of national vote. (…) We have this notion that democracy is trotskyism, anarchy. But that is not so. Democracy is first and foremost obeying the law.”

The hybrid nature of the Russian political system has been formalized through a calculated balance of counter-opposing policies.  We are fabulously corrupt but we are also going to start prosecuting high level officials that “take too much” without performing their duties of office.  On the same day that we pretend to be nice to Khodorkovsky, reduce his sentence, and call him by his patronymic, we also turn around and charge Alexei Navalny with amusingly dubious fraud and money laundering charges to send a message to the all-but-extinct opposition.  As the Duma charges forward to pass the tit-for-tat adoption ban to the U.S., when only some 17 (just 17!) Duma members vote against it, the media calls it a “split” legislature.  For one guy, it was even his dying wish to block these adoptions.

Vladimir Putin’s third term appears to be headed down a deeply ideological track, with a greater focus on the creation of a deeper nationalism, a structure of values and principles, and even a certain type of “ethics.”  Of course it becomes difficult to conceive of such things when separated from the tsar, as Putin’s ideology is Putin, Putin’s method is Putin, and Putin’s national project is Putin.  With such concerns over legacy, morality, and meaning of his time in power, the new tsar is going to have to make some unexpected and possibly confusing decisions to create a separation from his own past, as Russia coasts toward a deeper apathy based on an inauthentic political reality.