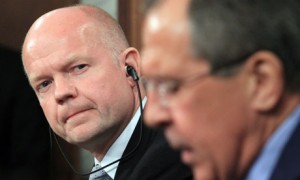 Analysts have been saying for some time that Russia’s role in the unfolding of the Syrian conflict could be significant.  According to the New York Times, US President Barack Obama made that point himself this weekend (which was marked by perhaps the most bloody episode so far in the conflict in the town of Houla) by highlighting the importance of Vladimir Putin’s involvement.  So far Russia has refused to back UN sanctions against the Assad regime on the basis that they may pave the way for military intervention and a Libya-style power transition.  The Foreign Ministry has retained the line that it would not wish to see such an imposition on the sovereignty of another state (who also happens to be a major buyer of Russian weaponry).

Experts remain fairly pessimistic as to whether Obama will success in winning over Putin, in a meeting which promises increasingly to prove something of a showdown.  The fact that Russia’s Foreign Ministry said today that the Houla slaughter was the work of  ‘both sides‘ would seem to support the hypothesis that Russia will not soften its stance.  The Guardian’s Simon Tisdall however, sees the hint of a shift in Russia’s position, courtesy of its support of the UN statement condemning the killings:

But there was no escaping the fact that the unanimous UN statement represented a breach in the diplomatic defences Moscow has erected around the Syrian regime. And it can be assumed with some certainty, given its importance, that Russia’s president, Vladimir Putin, will have taken the decision himself.

Even as the Syrian death toll rose above 10,000, on UN figures, and Kofi Annan’s peace mission floundered, Russia continued to peddle the regime line that terrorists and religious extremists were responsible for provoking the violence.

Now, by agreeing with the US and Britain that Assad is in violation of international law through his resort to “outrageous use of force”, Moscow has taken a both substantive and symbolic step towards backing the Syrian leader’s dethronement.

To find out why Tisdall believes this shift has come about, read on here.