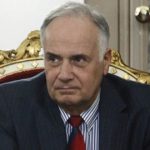 The antics of Russia’s ambassador to Serbia, Aleksander Konuzin, have raised eyebrows before.  In September the Economist featured an astonishing video of the disgruntled diplomat enlivening a Belgrade security conference by decrying Serbia’s lack of nationalism in a diatribe which went on for a good six minutes   His unabashed promotion of nationalism might in polite circles be called the work of a maverick.  In a country which fifteen years ago was in the throws of the most bloody conflict on European soil since WW2 as a result of entrenched inter-ethnic tensions, it might be seen as outright demagoguery. The agitator, it would seem, has not stopped there, but this weekend made an appearance at a Serb nationalist gathering.  Serbian Deputy Prime Minister Bozidar Djelic has stated that the envoy’s speech at the Serbian Progressive Party rally constituted ‘interference in Serbia’s internal affairs‘ and reiterated that Serbia expects foreign ambassadors to remain neutral.  Commentators have wondered what exactly Kozunin hopes to achieve, aside from loudly demonstrating that the Russian bear can truly growl.  A prime objective of Serbia’s foreign policy under western-leaning President Boris Tadic has been EU accession.  Recent clashes over Kosovo, whose independence Belgrade will not recognize, have however, seriously derailed its progress in this matter.  With the eurozone crisis making expansion an increasingly unlikely prospect, it seems that Russia could be hoping to capitalize on Serbia’s EU impasse. Whilst Putin makes no secret of hoping to exert a tightened grasp on the post-soviet sphere through the Eurasian Union, perhaps on its western side, it hopes to find through traditional ally Serbia, a Balkan instrument of Kremlin influence, with which to monitor the rest of the fragile region.  Whilst nationalist tensions across these post-conflict states remain high, it is certainly a dangerous game.