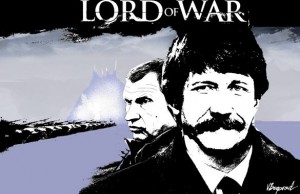 In the Moscow Times today, Georgy Bovt has written a probing article examining the Viktor Bout conviction.  Since the moustachioed arms dealer was sentenced to 25 years in jail on Friday in New York, the Kremlin has decried the decision and expressed its desire to have him repatriated.  Bovt explains how, to his mind, the interweaving of Bout’s interests with those of the ruling elite has guaranteed the ‘Merchant of Death’ a diplomatic shield of sorts.  It would appears that perhaps his greatest weapon is, quite simply, knowledge:

We will probably never know exactly how Bout was able to secure and sell such volumes of Soviet-era weaponry. But we can be certain that no ordinary private businessman could have accomplished it without very highly placed friends and patrons who shared in the $6 billion that U.S. investigators estimate as Bout’s total worth. Even a far less war-oriented business would be impossible to carry out on such a scale in the CIS without the help of senior government officials. If that is the case, Russia’s persistent appeals on Bout’s behalf might reflect more than unhappiness over Washington’s treatment of a former Soviet officer — and far more powerful interests than the official indignation of the Foreign Ministry.

Because Bout refused to cooperate with U.S. authorities, his highly placed Russian patrons do not consider him a traitor, as they did former Federal Security Service agent Alexander Litvinenko, who was found dead from poisoning in London.

For its part, the United States either did not investigate the money and weapons trail behind Bout’s operations or chose not to disclose that information to avoid further aggravating relations with Russia and violating unspoken rules governing the global arms trade.