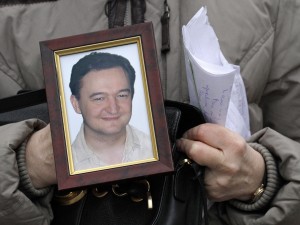 Described variously as ‘shameful‘, ‘baroque‘, and ‘grotesque’, the Magnitsky verdict has provoked a storm of condemnation across the Western media.  In 2009, the 39-year-old lawyer, subsequent to uncovering a massive tax fraud scheme, died in prison of untreated pancreatitis.  He then became the first person in Russia to be the subject of a posthumous trial. In an act of surreally symmetrical retribution from the authorities, yesterday a court found him guilty of tax evasion.  Here’s what Bill Browder, Magnitsky’s employer at Hermitage Capital, who was also tried and convicted of tax evasion in absentia, had to say:

“The Russian government is effectively a criminal regime now,” Browder said by telephone from London He he has been living in the UK since being denied entry into Russia after landing at Moscow’s Sheremetyevo airport in November 2005 on the grounds he was a threat to national security.

Once Russia’s largest portfolio investor, and one of President Vladimir Putin’s biggest foreign fans, Browder appeared to have run afoul of the Kremlin after picking up stakes in some of the country’s largest state-run companies.
“Doing business in Russia means either you’ve effectively become part of a criminal regime or a victim of a criminal regime,” Browder said.

“There’s no way to do business in Russia without seriously compromising yourself or putting yourself in grave danger.”
Browder said his and Magnitsky’s relatives had refused to take part in the trial. “We didn’t want to dignify a clearly illegitimate judicial process,” he said.

Speaking of Magnitsky’s relatives, Browder added: “As you can imagine, it’s one thing to have their son and husband murdered. But it’s just beyond sadistic to them to prosecute his corpse.”

Read more here from the Guardian.