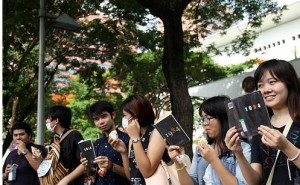 The following op/ed was originally published on RealClearWorld:

In recent weeks, the military junta in Thailand has been working hard on rehabilitating its image. A battalion of soft-spoken diplomats has been dispatched on an international charm offensive, lecturing policymakers and journalists on their good intentions and popular support. Just don’t ask them to prove it in an election.

Their efforts are aimed at promoting a distorted understanding of events — an exercise that the United States and Europe seem all too willing to accept. They want the world to believe that the May 22, 2014, military coup is somehow a “normal” feature of Thailand’s political culture, and as such, the junta should get a free pass.

If things continue along this path, we are due to have a replay of the aftermath of the 2006 coup. At the time, Western governments eventually gave their support to the military’s plan to introduce a new constitution that severely watered down representation and allowed them to keep appointees permanently entrenched in the Constitutional Court and Senate. It’s little wonder why the situation has culminated in violence and repression once again several years later, and undoubtedly what will happen if they remain unchallenged in 2014.

The military has already prepared its transition. A provisional constitution drafted by the junta will be introduced containing less than 50 sections. A cabinet will be formed in September as well as a 250-member “reform council,” all filled with people exclusively handpicked by the coup, which will then be followed by an election where the military will be able to re-install their colleagues in the Democrat Party — otherwise known as “The Party of the Army.”

Somchai Srisuthiyakorn, a member of the Election Commission, has already chillingly told European diplomats only “moral” people will be allowed to win the elections.

The recent revelation that planning for this coup began four years ago, with close coordination between the accused murderer former Deputy Prime Minister Suthep Thaugsuban (and former Democrat Party member) and General Prayuth Chan-ocha, should raise major red flags. This coup wasn’t a last resort or necessity to solve political deadlock — it was a premeditated, calculated agenda to steal control of the instruments of power and demolish a popularly elected government.

What must be understood about Thailand’s seemingly endless cycle of coups and repression is that this is not necessarily a political struggle, but a struggle against history. There is an unstoppable and growing political awakening taking place that is crashing up against traditional elites who view their fellow citizens as feudal serfs.

Since 1932, Thailand has never seen a period of true political stability due to this struggle. In her excellent book “Revolution Interrupted,” the academic Tyrell Haberkorn describes Thailand’s history as occasional periods of silence punctuated by violent cycles of coups and repression. The protagonists may change, but the role of the Thai Army is always the same.

Today we are in a silent period, where opposition to the coup has been frozen through threats, intimidation, interrogations and show trials. There are credible rumors of atrocities taking place far from the public eye, while right in the center of Bangkok people have reportedly been arrested for reading Orwell, holding sandwiches and carrying signs with slogans such as “Long live USA.”

Such wildly repressive behavior is what we have come to expect from the people who brought us the 1976 Thammasat University massacre and the 2010 Bangkok massacre. These acts of unaccountable violence and repression by the military are likely to continue, as no member of the Army has ever suffered a loss of “prestige” for toppling an elected government or ordering troops to fire upon protesters.

How we react to the Thai coup matters. As the Australian academic Nicholas Farrelly has argued, the actions of the U.S. government in response to Thailand’s past coups has guaranteed “any stigma associated with military government never overwhelmed international acceptance.”

It’s time for a new approach. The junta’s transition plan must be rejected and understood for what it is: a blatant attempt by one minority to dominate the majority. The soldiers must be told to return to the barracks and stay there. The U.S. government as well as the European Union must demand an immediate handover to an independent civilian administration that is capable of overseeing free and fair elections, leading to a new constitution by the people through elected representatives, not coup-appointed figures.

Most important, targeted sanctions must be immediately applied against members of the Thai army to restrict their travel privileges and freeze their bank accounts, as well as those of the businesses and corporations that sponsored the overthrow of the government. These individuals committed a grave crime, and it is time they be treated as criminals.

The reason why we no longer see regular military coups in places like Africa and Latin America is because it has become internationally unacceptable. There’s no reason to expect any less from Thailand, especially given the tide of history.

Robert Amsterdam serves as international counsel to the Organization of Free Thais for Human Rights and Democracy.