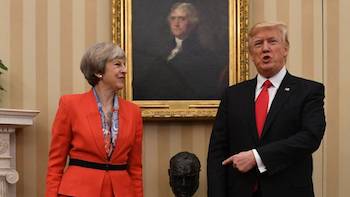 The outcomes of both Brexit and the US election were unexpected, disruptive, and driven by a similar surge of nationalism. And so you’d think that the first meeting of Prime Minister Theresa May and President Donald Trump would be a celebratory affair. It certainly hasn’t felt like that.

When Prime Minister May arrived yesterday, the Tory press suggested she would be “igniting a political romance.” Less sanguine, the New York Times described it as a meeting between a “Stiff Headmistress” and the “Great Salesman.”

On the one hand, some may describe May’s speech to Republicans yesterday as timid. She was certainly on board for greater isolationism.

“The days of Britain and America intervening in sovereign countries in an attempt to remake the world in our own image are over,” she said, a quoted by the Telegraph. “But nor can we afford to stand idly by when the threat is real and when it is in our own interests to intervene.”

But apart from throwing this bone to Trump, reality came crashing down on the difficulties of a realist dealing with another realist. Britain has national interests, some of which are not yet evidently supported by President Trump. Some of those interests collide with casual statements by the US Commander-in-Chief, such as NATO being “obsolete,” or applauding the demise of the European Union.

After some gently pointed comments on Trump’s perceived leanings toward Russia, May introduced the “engage, but be aware” mantra for dealing with Putin.  This was partly successful. The press conference today featured both Trump and May expressing “100%” commitment to NATO.

But ultimately, the tepid cooperation achieved during this visit cannot overcome the fact that the UK is now operating in a different international environment with Trump in the White House, and that may not be a bad thing. Mrs. May is under extraodrinary domestic pressure to show that the UK still has its most important friend – but it is much easier to work on things together than to both agree against intervention. Certainly the adventurism undertaken as part of the long-running special relationship has not always borne fruit, and more often, damage.

However one wonders if the Brexiteers would have been as enthusiastic to leave the EU if they knew that a new wave of isolationism were about to crest on their Western shores.

Britain voted for greater sovereignty, and that’s their decision, whatever we may think of it. But there is a reason why these alliances and multilateral institutions were formed in the first place, and the value of a secure, united Europe really shouldn’t be a matter of debate.  If everyone wants to go it alone, they will quickly discover the ravages of an international system without rules, without norms, without friends. And that will benefit precisely no one.