The Pied Piper Of Protest 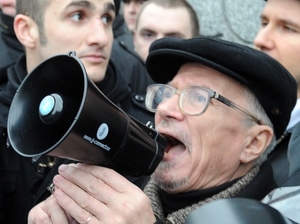 In today’s Moscow Times Yulia Latynina takes issue with Other Russia leader Eduard Limonov’s incendiary stance on how the Russian ‘evolution’ should be managed, (revolution would be a better option, he suggests).  ‘Pied Pipers took the citizens away,‘ Limonov wrote of the other opposition leaders on Saturday. ‘We missed a historic opportunity.’   Laynina expounds quite clearly her take on how the protest movement, in its expanded middle class incarnation, could change Russian society.  She also identifies exactly who she is backing:

I attended the rally as an ordinary participant, and I saw what type of crowd it was. With the exception of a few flag-waving groups of professional revolutionaries, 80 percent of those present were young, educated white-collar managers. In other words, it was Russia’s “Third Estate” — a bourgeois crowd.

The political fringe did not attend the demonstration because they will not go anywhere without a bribe of at least 100 rubles, and for 100 rubles they would even support Vasily Yakemenko, head of the Federal Agency for Youth Affairs.

The pensioners did not join in because they only protest issues like the monetization of benefits, not the falsification of election results.

Since those who did show up at the demonstration had a head on their shoulders, they had no intention of seizing the State Duma simply to satisfy Limonov.

If Limonov thinks an opportunity was lost, why doesn’t he storm the Duma building himself along with his 500 supporters?

And if Limonov thought that socialite Ksenia Sobchak, journalists Bozhena Rynska and Leonid Parfyonov and tens of thousands of other successful people who are able to think with their own brains would seize the Duma based on his command, he is deeply mistaken. It is as if Limonov appointed himself chief of the Central Elections Commission, stole millions of votes, and acted as if he had a mandate from millions of Russians.

I will not try to speak for all the tens of thousands of angry citizens. I will speak only for myself. I had never attended a street demonstration before because I had always considered them a complete waste of time. I took part in this rally because it would have been unconscionable not to.

If, when we gathered on Bolotnaya Ploshchad, someone had told me to seize the Duma, I would not have gone. Why should I? To take a bullet for Limonov? I cannot speak for Parfyonov and Sobchak, but I don’t feel a personal need for such action.

I did exactly what I wanted to do and achieved exactly the result I was after. We, the Russian Third Estate — the virtual party of blogger and up-and-coming politician Alexei Navalny — showed the ruling kleptocracy that if they want to avoid a revolution, they are going to have to dump Prime Minister Vladimir Putin.