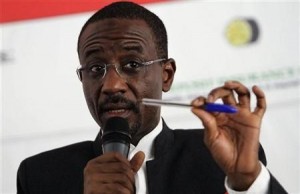 Lamido Sanusi, former Nigerian Central Bank Governor has a replacement. President Goodluck Jonathan has selected Godwin Emefiele, head of Zenith Bank, to replace Sanusi – even though speculation still rages as to whether Jonathan even has the authority to remove Sanusi. The National Assembly must confirm the appointment of Emefiele – just as it should have been the National Assembly to ask for Sanusi’s removal.

Nigeria’s markets – home to the second-largest economy in Africa – had a negative reaction to Sanusi’s removal, with equities in the financial sector being particularly hard hit.

“The sacking of the central-bank governor would cause investors to flee from most places, but it is especially damaging in Nigeria,” The Economist reported. “News of his removal led to a slide in the naira, a sharp drop in the stockmarket and a temporary halt to bond trading. The announcement that Godwin Emefiele, an experienced banker, would succeed him in June has done little to restore confidence.”

Just a few short years ago, Sanusi held the distinction of Central Bank Governor of 2010 for both the African continent and the globe, as awarded by Banker magazine. Sanusi earned the award for reform work done after taking the helm at the Nigerian Central Bank in 2009 and paring Nigerian inflation back to single digit rates.

“The editor of the magazine said then that few candidate names generate an overall consensus on judging panels but that Sanusi had been chosen unanimously as the best global central bank governor of the year,” Aljazeera reports.

As a widely respected Central Banker, Sanusi’s reputation lends credence to his claims against NNPC, while Jonathan’s own reputation suffers from allegations of corruption and cronyism. Sanusi will have his day in court – he’s set to appear before the High Court in Lagos on 21 March.