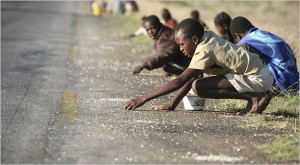 This week the United Nations Dispute Tribunal handed down a decision finding several officials from the Office for the Coordination of Humanitarian Affairs (OCHA) and the UN Resident Coordinator in Zimbabwe in 2008 involved in grave misconduct concerning the inhumane treatment of the former Head of Office in Zimbabwe, Dr. Georges Tadonki, whose urgent warnings in early 2008 about the unprecedented political violence, the resulting large scale crisis and the closure of humanitarian access were ignored by his superiors.

The defense team for Tadonki has alleged that the termination of Tadonki’s position in Zimbabwe in March 2009 was a politically motivated punishment by high-ranking figures in response to his reports regarding the repression of political opponents and lack of preparedness for a cholera epidemic, which would later claim thousands of lives.  The legal team argued that Tadonki was sidelined by these officials who allegedly sought to protect Zimbabwean President Robert Mugabe.  By June 2008, the political and humanitarian situation eventually deteriorated according to Tadonki’s predictions, to the point that Morgan Tsvangirai withdrew from the presidential run off election leading to the unchallenged victory of Mugabe.

The Tribunal, which was overseen by three judges, noted that Tadonki’s reports on the Zimbabwe crisis and the UN unpreparedness “stepped on some big toes by stating the obvious,” and that his unlawful removal in response was an indication that “clearly, humanitarian considerations only played second fiddle to political issues.”

Robert Amsterdam of Amsterdam & Partners LLP, the lead counsel for Tadonki, said that the judgment is historic in that UN OCHA has been ordered to present public apologies to the applicant who has been awarded moral damages and payment of compensation as well as the removal of all wrong and defamatory reports from his personnel record. The landmark judgment also refers a number of senior officials for disciplinary proceedings, including the then Humanitarian Coordinator, Mr. Agostinho Zacarias; the Under-Secretary-General for Humanitarian Affairs, Mr. John Holmes; the Assistant Secretary-General for Humanitarian Affairs, Ms. Catherine Bragg and the then Deputy Head of OCHA, Mr. Farah Muktar.  The judgment referred these people to Secretary-General Ban Ki-Moon for accountability purposes.

“To be vindicated after all these years restores my trust in the United Nations institutions, and reminds me why we should all continue working to cooperate among the international community to protect the poor and the most vulnerable people,” Dr. Tadonki said.  “I would just like to move on, put the past behind me, and continue to work and live in peace with my family.”

Dr. Tadonki continued:  “The hard work and dedication of my UN colleagues has not been tarnished by this decision, and their reputations should not be confused with the misconduct of only a handful of individuals.  I hope that this ruling will deter senior managers from abusing power in the future and that the rights of UN staff will be better respected, as they are often in the frontline of protecting the others without being protected themselves.”

Dr. Tadonki belongs to the new generation of African leaders. He has dedicated his life as an expert internationally recognized and respected by his UN colleagues in the fight against social vulnerabilities, natural disasters and conflict risks in Africa.  Yet all was done by OCHA to end his career and even his life for “stepping on big toes”. This judgment shows that it was wrong and must stop.

“We are pleased with the ruling and hope that the defendants will recognize that an appeal would only create further unnecessary damage,” said Mr. Amsterdam, whose law firm is representing Tadonki on a pro-bono basis.  “This case sets a precedent for the United Nations, and should be read carefully by any of those who have been subject to arbitrary assessment or unfair contract termination throughout the UN system.”

Amsterdam & Parnters LLP is an international law firm with offices in London and Washington DC.