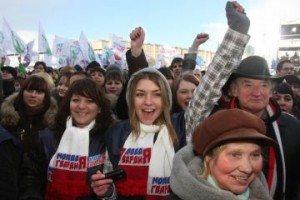 This week a plethora of articles have emerged presaging the vote rigging extravaganza that will be Sunday’s parliamentary elections.  With all the talk of falsifying of results and opposition crushing, it is easy to forget that UR also employs tactics specially designed for the mobilization of certain voters who have and will cast a vote their way in the elections.  A whole system of, for want of a better word, bribery, (though the notion of a ‘contract’ is doubtless preferred), is in place to ensure that certain groups continue to support the ruling party, whose majority currently looks precarious.  Grigory Golosov from Open Democracy addresses this practice (as well as that of neutralizing the opposition) in an insightful in-depth piece on the pre-election game plan.  He breaks this UR-inclined demographic down into several categories:

This system for mobilising the voters has been refined over many years and is now quite sophisticated.  According to analysts, some 30-40% of Russian voters come to the polling station for reasons that are not political. They have been mobilised to vote for ‘United Russia’, and most do, though more often than not the authorities are not in a position to monitor their behaviour. The demand to see photo evidence of voting, for example, can be got round by photographing the completed ballot paper and then spoiling it.