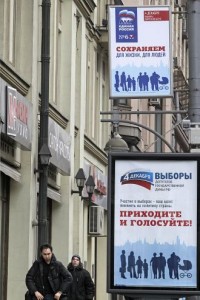 As the parliamentary elections approach, and reports of United Russia’s dwindling popularity multiply, it is fascinating to see how Russia’s ruling party is pulling out the stops in its race to victory.  It seems that when the authorities are not solidifying their power base by quashing the political opposition, they are attempting to design innovative ways of capturing voters’ attention.  The result are, however, no less creepy.  Today the Moscow Times reported on the optical illusion which is sweeping across the capital city: a United Russia poster which bears startling resemblance to the city authorities’ posters encouraging people to vote full stop (both are seen on the image to the left).  And there was us thinking that there was a difference between voting in Russia and voting for United Russia.

In another particularly bizarre report (though whether United Russia has anything to do with it remains unsubstantiated) it appears that a fan of the ruling party has ventriloquized Volgograd’s World War Two motherland monument, by creating a Facebook page for it, via which it has trumpeted the virtues of the city’s administrators.  Ria-Novosti reports how in one post ‘the “statue” describes how “my son Viktor Zubkov” and “my other son Anatoly Brovko” launched a “good and necessary” campaign to plant “a million trees in the Volgograd region.”‘  At least we can say the party is up to date with the social networking of politics.  Now steel yourselves for a Twitter-based Jedi mind trick.