Waiting for Obama to Wake Up on Thailand 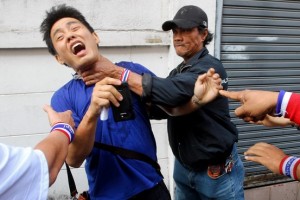 Finally people are talking about the Obama administration’s lackluster response to the brutal military coup in Thailand which toppled an elected government. This is an issue that deserves far more attention.

In the days following the coup, the State Department said the right things. However, as little serious attention was being paid to Thailand, given more deadly events elsewhere, the junta saw that it paid no price for continued repression. To demonstrate the value the Obama administration places in Asia and the principle of one-man-one-vote, the junta leaders should receive an asset freeze and visa ban, a tool the administration has used everywhere from Hungary, a NATO ally, to Venezuela.

The absence of any U.S. response to the rollback of liberty and democracy in Thailand sends the wrong message to Myanmar; which President Barack Obama and former Secretary of State Hillary Clinton have visited and on which they pin much of their hope as a legacy foreign policy success. Military rule in Thailand could also have repercussions for the new democratically elected leaders in Malaysia and Indonesia. They may find themselves more susceptible to pressures from their military or Beijing, convinced that Washington will stay on the sidelines. It will also make progress with the TPP difficult. Congress and the American people will not want to link U.S. markets more closely to a country experiencing marshal law, military rule, a shrinking economy, and instability.

Is it really so controversial for State Department to insist that emergency rule is suspended and that elections are held in 2015? I don’t think so.