Zambia’s Attack on Freedom of Expression 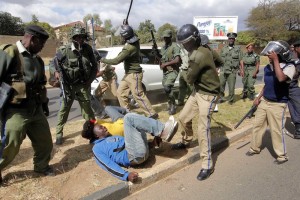 This opinion column was originally published in the print and online editions of the Daily Nation newspaper.

The right to freedom of expression is inalienable.  It is the most basic, fundamental human right: your freedom to hold opinions and communicate them.  It is a right protected by law for every Zambian citizen, from the Constitution to the African Union’s Banjual Charter of Human and Peoples’ Rights to the Universal Declaration of Human Rights of the United Nations.

And yet, this right is routinely ignored and violated by the Patriotic Front government of President Michael Sata, whose intolerance for criticism has deprived Zambia of the checks and balances that should provided by an independent media in a normal democracy.

In Zambia today, the PF believes that it is illegal for you to have an opinion.  You can be considered a “criminal” for disagreeing with the president, and apparently, you can face jail time if you dare to voice that criticism.

President Sata’s draconian crackdown on freedom of the press culminated last week with the arrests of documentary filmmaker Chanda Chimba III, former managing editor of the Zambia Daily Mail Davis Mataka, as well as former Minister of Information and Broadcasting Ronnie Shikapwasha.  Only a week earlier, Sata’s thought police threatened yet again to shut down the online news website Zambian Watchdog, while the president has also filed personal lawsuits totaling more than $3 million against journalists and others who have “dared” to criticise him.

The charges being filed against these individuals are highly questionable, ranging from defamation to “unregistered publications” to the most flexible of all Zambian laws, the Abuse of Office clause.  Director of Public Prosecutions Mutembo Nchito and the Joint Task Force are doing the dirty work, building a case that could permanently stain Zambia’s reputation as a free country while sending a message of Gestapo-like intimidation to the opposition.

But there are at least three reasons why President Sata’s attack against journalists could backfire, creating even bigger problems for the government.

First, there is the question of timing.  Why now?  Chanda Chimba III created his “Stand Up for Zambia” documentary series almost two years ago, and it has never been a problem until now.  Apparently the government discovered that these videos had only recently been uploaded to YouTube for the whole world to see.  By trying to brutally punish the creators of the film, the PF will actually drive more attention to videos, as thousands of more people will go online to see the truth about President Sata.  Citizens may ask: what exactly are they trying to hide?

Secondly, there is the dangerous precedent.  It was strange to read the headlines in the pro-government Post Newspaper as well as the Times of Zambia, which congratulated the PF for arresting journalists whom they chose to title as “propagandists.”  But who really are the propagandists?  If we could count the number of defamatory statements published everyday in the Post, the Daily Mail, and the Times of Zambia, it would take the courts a decade to process all the cases.  It’s a great pity that journalists like Fred M’membe, Anthony Mukwita, and Godfrey Malama, who once fought for truth and freedom via the press, are now playing the role of praise singers as the government cracks down on their colleagues.

Lastly, one has to wonder if the PF is aware of how bad a reputation it is creating.  Zambia under President Sata is rapidly becoming regarded as an abusive authoritarian state that fails to uphold basic rights.  It is a message that is quickly being spread from London, where I live, to Washington to Abuja to Pretoria.  Putting journalists on trial will not help matters, and the Zambian leadership will soon have to recognize that they cannot act with impunity without international consequences.

The fact is that media in most African nations – especially state owned media – often reflects opinions and attempts to persuade the reader.  We all know it, we all understand it, but still we are able to interpret facts and events.  You may very well dislike the work of Chanda Chimba III, and maybe you even passionately disagree with the arguments presented in “Stand Up for Zambia.”

But he is fully entitled to his constitutional right to express those opinions, and so are you.